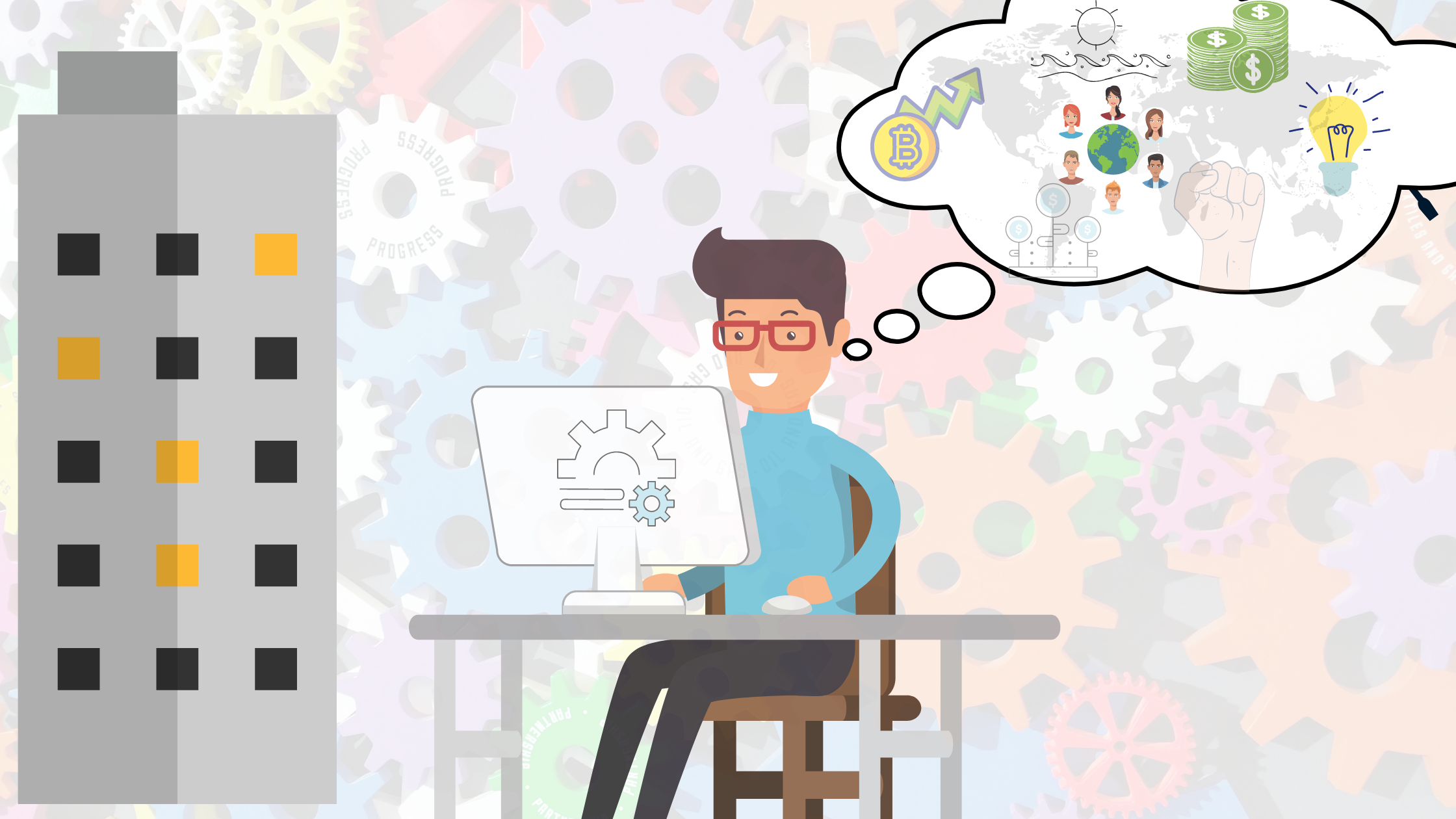 As automation through technology trudges along the course of Moores law especially via electrical power, technology, artificial intelligence etc. the ripple effects are bound to be seen on the world and in your local economy especially as regards human capital, growth and labour as we embrace a new phase of industrial and human capital development.

Where you position yourself now may very well impact your socio economic future. You don’t have to live a life of frugality while existing in a world of plenty.

As leaps and bounds are made across sectors including Industry, labour is receiving shock waves.

Industry was once touted the largest employer of labour, ushering a huge new change in human living. It powered mass education via the print and greatly contributed to the world system we have today.

Humans seem to have conquered the surface of the earth. Currently attempting to repair it, they look beyond, with refined technology to build a sustainable future. A future that runs itself while humans are free to pursue higher ventures beyond earth.

You don’t have to live a life of frugality while existing in a world of plenty.

There is lacunae created by the shift in labour/mindset and this can only be filled by a labour market that is largely unavailable. The assembly line form of production has been almost perfected. Labour intensive Industries like agriculture virtually don’t rely on as many human hands to provide produce to feed millions. Optimisation of existing industries and automation of manually intensive labour hold the keys to this paradigm shift.

Already, job prospects abound in the technology sector. Professionals are required to grow this sector and as the demand for innovation increases, so do the job roles.

First world countries are already paving the Tech sector, supplying roles that tend to pay as much as $80,000 to $150,000 per annum for example in the United States. Offers are several times above the the average wage of more traditional labour. Companies are recruiting tech specialists straight from boot camps as computer science graduates are still insufficient to fill this roles.

Career shifts are seeing people who earn as low as $40,000 to $80,000 averagely, shift to the tech sector, to land better roles by boosting automation. In fact, most businesses are now attempting to automate traditional roles in order to increase their ease of business. Governments are not left out as they all attempt to automate to improve transparency and make the processes of running government leaner and faster. In an attempt to make this easier, countries such as Estonia are already adopting special immigrant visa programmes for experienced foreigners to come in and build their tech sectors.

Labour dependents are encouraged to learn a skill in the tech sector which will be found useful in the tech space to avail oneself of inherent opportunities. Some of these required skills which can be applied to new roles and already existing roles, include;

People in traditional fields e.g. medicine, engineering are learning new technology in a bid to digitise and simplify their businesses and increase return on investment. A recent example in automation pursuits includes remote surgery through mechanised surgical arms which may be controlled remotely. You may begin to imagine the effects of this on medical tourism.

In an extended practical application, data from human tissue identification and repetitive procedure can be gathered and analysed by AI which could subsequently sequence such procedures and eventually perform such medical procedures by itself. While we are still a long way off, humans are already growing organs which may substitute as replacement to failing body parts through CRISPR, another nascent technology.

The future is exciting depending on your perspective.

There’s an underlying renaissance where human capital and living can be so optimised that with complete access to knowledge, humans may aspire for the stars rather than get lost in everlasting battles for socio-economics.

Reshaping labour can come in an example of merged fields such as a medical student who may code to create a database for storing patients data files and facilitating easier access to that data as a more familiar example.

Learning resources are abound with several of them offering scholarships for interested participants. Effective MOOCs some of which I’ve made use of include; Coursera, Udacity, Lynda, CodeAcademy, Udemy, Khan and recently LinkedIn Learning etc.

Many even offer skill paths and career prospectus on completion of programmes.

The new labour market is accessible irrespective of age, race or location. All you have to do is to prove that you can function and execute in your chosen digital field.

Employment of people working in IT occupations is expected to grow 12 percent from 2014 through 2024. 488,500 jobs will be added during this period.

There are openings for career shifts such as those seeking to move from traditional to digital marketing, sales etc. In fact, these makeup the bulk of career prospects in tech. There is also the need for traditional institutions to remodel and optimize themselves to cater to new educational needs or find themselves left behind. This presents another opportunity for transformation.

Human Capital and Growth — A Focus on the developing world

The demand for softer tech skills will continue to rise as tech sectors jobs like cryptocurrency experts, have opened up the field of forex and digital currency trading to otherwise hobbyists and enthusiasts.

These soft skills have created a means of generating income and even countries with unemployed talents and third world status’ can see their GDP increase through incoming forex from available jobs in this sector.

As an example, the increasing adaptation of cloud computing and cybersecurity will bring about increases in employment, a rise in symbiotic fields like healthcare IT, mobile networking etc. Data management as well will also contribute to improving forecasts for the information technology sector.

Governments that are interested in improvements of their economy can begin to train and export skilled labour to 1st world countries in need of skilled workers in exchange for required services rather than the current labour drain with no upsides. Training and retraining of civil servants across sectors and employment of capable experts can bring a shake up to an economy and drive growth.

Governments are encouraged to create enabling environments by providing incentives; from Tax breaks to Special status visas to comprehensive guidelines for remunerations as well as changes in educational curricula to create room for tech/digital fields and to help professionals grow and boost the sector.

An appropriate reply will be to show him/her the opportunities abound in this area. Power problems can be solved by tapping into the sustainable power such as solar panels, lithium batteries and inverters.

In exchange for resources, leaders may negotiate for technology transfer

In exchange for resources, leaders may negotiate for technology transfer in the form of foundational infrastructure such as factories, training and local staff representation rather than stocks or liquid assets whose capital and profits still end up in 1st world banks.

Incubation hubs are also changing communities and what was once internet Cafes are now remodelled as hubs to grow innovation and build wealth. Governments can also create digital zones within states to build tech communities which will impact the zones around them. These zones can be quickly designed with special status’ in mind by giving them electricity to work unhindered, providing security and thereby leading to exponential transformation of environments and countries as a whole.

This equitable arrangement will have a positive effect on urban misalignment and encourage symmetrical growth even to rural areas.

Individuals from the developing world who wish to jump into the new economy will first have to build a new mindset with the understanding that labour with rewards of quality income is no longer an exclusive preserve of the regular 9–5.

One must then train and retrain oneself in their chosen digital field from the wealth of available resources to stay abreast and to tap into the opportunities that abound.

The most beautiful thing about this shift in labour is that workers can work remotely from anywhere and still boost productivity.

In a new world where labour is highly skilled, competitive and qualified workers largely unavailable, individuals can’t expect expertise in one day but the rewards, especially the freedom, is worth the time and effort it takes to build a successful career in these new fields.

This article is originally published in Medium

QUICK-SHARE :
Getting a Hang Of State In React: A UI Challenge